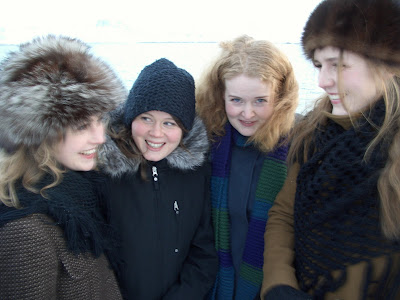 Iceland's Amiina, who I first encountered in the film Screaming Masterpiece in the 2005 Melbourne International Film Festival, and then the very next night supporting Sigur Rós, have just released their debut album locally. Called Kurr, it's utterly sublime, as you'd expect from a band whose instruments include bowed saw blades, water-filled crystal glasses, xylophones, violins and much more.

The album also shows definite growth and experimentation from their 2005 EP, AnimaminA - and also the presence of a slight but significant spelling change, from 'Amina' to 'Amiina', to make their name more distinctive (particularly useful when you Google them!).

Want to know more? There's a Dan Rule Age article about the band here, or, you can sit back and enjoy the following sublime performance via YouTube:

Posted by richardwatts at 12:56 pm

Is there a store in melbourne where yiou can get this?

Probably Polyester, Missing Link, Raoul Records would all be worth a shot, anonymous. I got a promo copy about a week ago, so if it's not out already, it should be very, very soon. Hope you like it when you get your hands on a copy!

I really love this. Thanks! Will get a-hunting.

why haven't i bothered to get this yet?!